Plenty of Resistance to Plenty

Plenty of Resistance to Plenty
Posted by LunaJaffe in Wild Money Exercises
1 Comment
Two months into my year of Plenty I’ve already been transformed.  On New Year’s Eve 2013 I did a ritual about stepping through my resistance to wealth and releasing my remaining business debt.  What I noticed in 2013 was that my business revenue jumped 40%, but my own salary grew by less than 10%.  I observed a “make more, spend more” pattern and took a deeper look at the story I was telling myself.

I discovered that my inner story hadn’t yet caught up with reality.  I manage $43M in client assets…. I know how to manage money, yet inside there were some lingering beliefs I needed to clear.

Thus the New Year’s Ritual— I wrote the amount of my debt on a heavy rock and carried it around for 24 hours.  I cleaned my office, every surface sparkling, every corner free of dust.  I purged files and organized until it felt fresh and clear.  Then I lit incense and prayed— speaking my desires out loud, all of it, the letting go and the opening up, along with the feelings of fear, grief, shame, excitement, and hope.

I went home still carrying my rock, yet feeling lighter.  What I didn’t anticipate was how thorough this clearing out process was going to be.  That night, while playing “Cards Against Humanity” with friends, I became violently ill with food poisoning and rang in the New Year by puking my guts out.  Guess I really needed to purge!  I think I’ve thrown up three times in my entire life, so this was momentous (and I was still carrying that rock!). 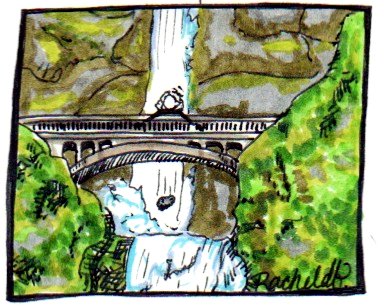 The morning of Jan 2nd I finally felt strong enough to complete the debt rock ritual.  My partner drove me to Multnomah Falls, 627’ of pounding, frigid water gracing the Columbia Gorge about 45 minutes from Portland.  I weakly walked to the bridge halfway up the falls, stood there with the falls at my back, and a sweeping view of the gorge in front, then threw that sucker with every ounce of strength I had.

Again, I felt lighter as I walked away, not looking back.

Just a few days later, a huge boulder fell from the top of the falls and took a chunk out of the bridge exactly where I was standing!!!  Whoa!  Not sure how to interpret that, but I’ll take it to be an exclamation mark from the universe!

Food poisoning was followed by influenza and I was down for two weeks, which gave me time to write and think, in-between moaning and coughing.  I started to think that I would need my head examined if I ever considered trying to mess with my belief systems again!

Then, on Feb 12th, a drug dealing punk broke into my office and ransacked it… yet another opportunity to let go.  There were plenty of tears, plenty of things stolen, plenty of hours wasted trying to get my office back to normal— but also plenty of awareness, gratitude, support, and laughter.  The weirdest part of this whole experience is that the burglary drove me back to yoga.

I’d been ignoring my body and pushing so hard, and I stopped in my tracks to evaluate what I needed to help me handle this situation with grounding and calm.  It was as if the word Y O G A was lit up in neon across the sky.  For over a week I’ve been back in my body, feeling the joy of embodiment, loving how strong my neglected body is— though sore doesn’t begin to describe me!

In yoga we are taught to breathe into resistance, to notice what feels tight and where we are holding on.  As I explore plenty I bring this awareness to my practice.

I can resist the purging or let it go, I can wallow in a victim mindset or simply notice how I respond, what reflexes are activated.  Choosing plenty is a process, as is choosing to walk the challenging path of financial wellness.(click to tweet)

We have to practice, breathe into the resistance, accept and love ourselves for where we are. Then we need to rest deeply in gratitude for how life brings us gifts in strange, unusual, and mysterious ways.

Here is a .pdf for exploring your own relationship with plenty. If “plenty” is a concept that you haven’t delved into before, this fun little exercise will help you see where you are right now and allow play while you explore.

Luna Jaffe is a Certified Financial Planner, visual artist, author and professional speaker. She holds a Master’s Degree in depth psychology and is the founder and CEO of Lunaria Financial based in (yet not limited to) Portland, Oregon.

Leave a reply Click here to cancel the reply

This site uses Akismet to reduce spam. Learn how your comment data is processed.

Forgive the dust! The site it currently live during updates…